BioPortainer Workbench is an open-source software developed under the MIT license and designed in a modular way, aimed at facilitating user interaction with Docker environments in three different computational layers: (i) infrastructure, (ii) platform and (iii) application. Its basic structure is briefly described in Figure 1. To deploy the software, user must initially access the BioPortainer Workbench image (Figure 1b) and install it, either in a single Docker engine, or in a Swarm cluster (Figure 1c). Once installed, BioPortainer Workbench (Figure 1d) consists of two basic containers: the BioPortainer Panel and the BioPortainer Pipeline Runner (Figure 1e). From a functional point of view (Figure 1f), the two containers offer a number of tools that allow users to perform a series of actions in the created Docker environmens, such as: (i) managing Docker resources associated with the BioPortainer Workbench; (ii) installing bioinformatics applications based on several platforms described in the literature and (iii) launching different types of analyses, using either command-line (CLI), or graphic-based interfaces (GUI). Such analyses may be conducted with the help of BioPortainer Workbench’s own resources (Figure 1g), or with resources harnessed from external repositories which provide preconfigured images, files, commands or scripts for the execution of bioinformatics software, with varying levels complexity (Figure 1h).

The Docker Compose file contains all the necessary settings for complete system operation, including the execution settings of the two main containers (BioPortainer Panel and BioPortainer Pipeline Runner). In addition to these two main modules, there is a third module (not shown in Figure 1) called the BioPortainer Watchtower, designed to monitor the main containers during execution. This module also monitors the original BioPortainer Workbench images, updating the whole Docker environment, whenever new versions of the software are made available. The Docker Compose file can be easily edited with the aid of any text editor, so as to expand its functionality by incorporating additional features, such as web proxies and/or tools for Continuous Integration & Continuous Delivery (CI/CD), such as Jenkins, for example. To assist in the incorporation of these new resources, a virtual network, called BioPortainer Local, was created, in order to guarantee efficient communication between the containers. Thus, if users wish to incorporate new features into the BioPortainer Workbench, it is necessary to insert such features in this network, through the networks parameter, to guarantee their efficient integration to the different modules of the software. 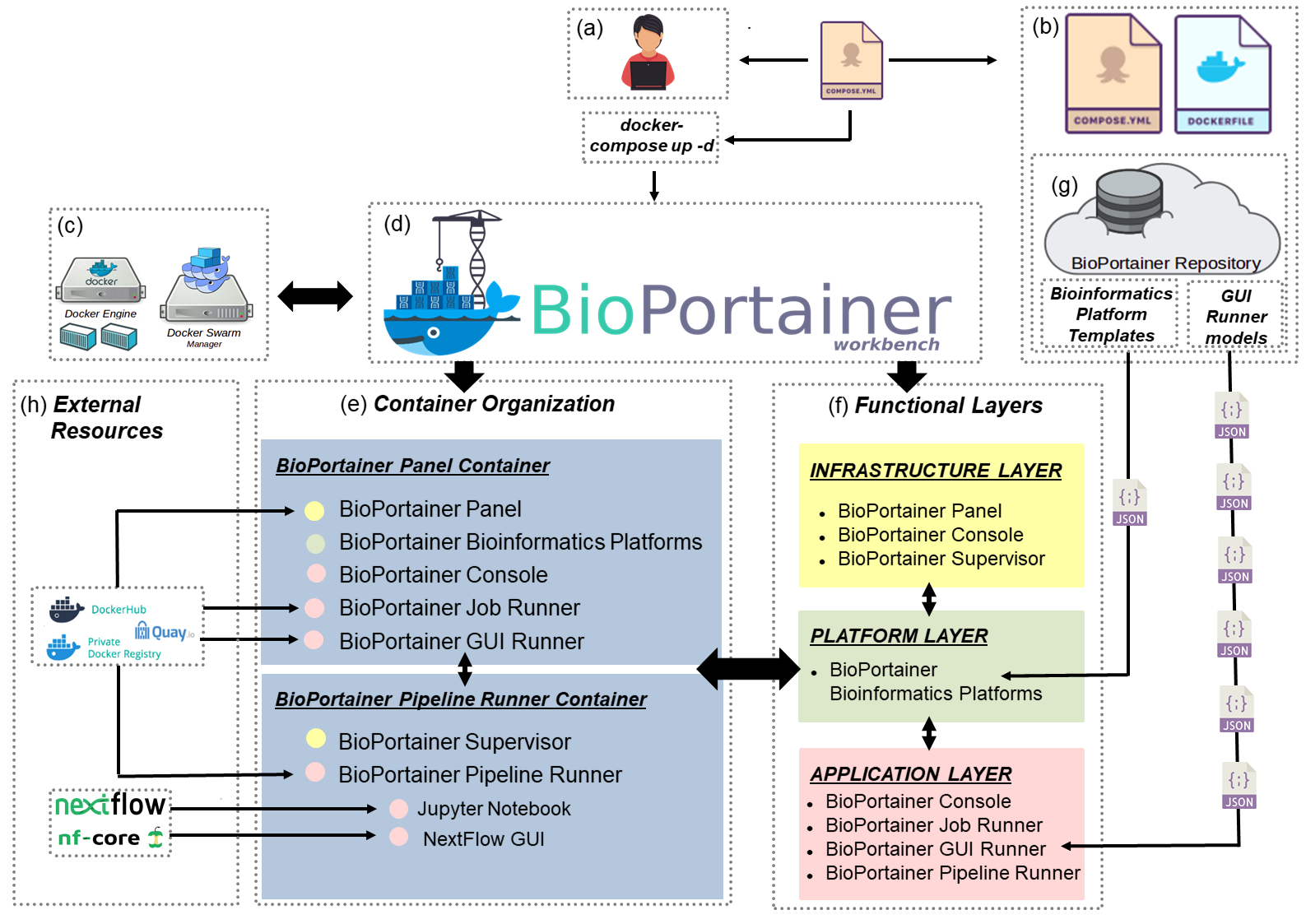 Two steps are required to start a container containing BioPortainer:

During the deployment process, some ports and disk volumes will be automatically configured in the host machine. Details on the ports and volumes created are available in the BioPortainer Workbench User Manual, which accompanies this manuscript as a supplementary file. In a standard implementation, the BioPortainer Workbench will use the localhost address (IP 0.0.0.0) as the default address for its internal links. If access is not performed through a local network, additional settings must be made in the Compose file, according to Docker’s official documentation, available here.

You are invited to contribute new features, fixes, or updates, large or small; we are always thrilled to receive pull requests, and do our best to process them as fast as we can.

Before you start to code, we recommend discussing your plans through a GitHub issue, especially for more ambitious contributions. This gives other contributors a chance to point you in the right direction, give you feedback on your design, and help you find out if someone else is working on the same thing.

Permission is hereby granted, free of charge, to any person obtaining a copy of this software and associated documentation files (the “Software”), to deal in the Software without restriction, including without limitation the rights to use, copy, modify, merge, publish, distribute, sublicense, and/or sell copies of the Software, and to permit persons to whom the Software is furnished to do so, subject to the following conditions:

The above copyright notice and this permission notice shall be included in all copies or substantial portions of the Software.

The software is provided “as is”, without warranty of any kind, express or implied, including but not limited to the warranties of merchantability, fitness for a particular purpose and noninfringement. in no event shall the authors or copyright holders be liable for any claim, damages or other liability, whether in an action of contract, tort or otherwise, arising from, out of or in connection with the software or the use or other dealings in the software.

This page was generated by GitHub Pages.